Every so often, I get the urge to redo my UI. I feel like it isn’t giving me the information I need, that it’s cluttered and it just needs be redone. This is how I felt last week when our new raid team decided to go on in and kill Blade Lord. I wasn’t able to keep up with my cooldowns, my screen felt crowded and my attention was all over the place.

Last weekend, I decided to fix the things that were troubling me. It wasn’t that my old UI was bad – but it was two years old, and a lot of things have changed since then. My healing has changed, the environments have changed and most importantly, my class has changed a whole lot. So it was time to have my UI catch up as well.

Here’s a look at what my UI looked like before: 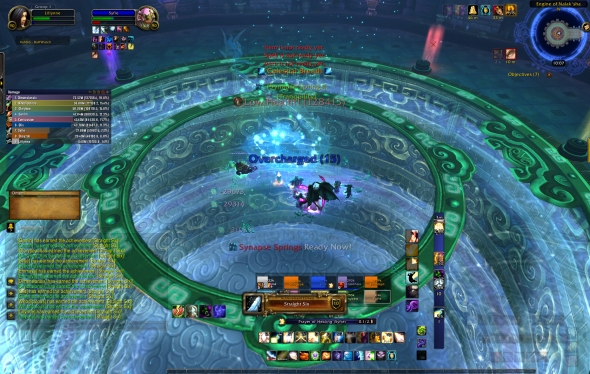 In general, this worked for me but there were a couple issues – not all of which can be seen with this screenie.

One of the big ones is my cooldown bar on the right (SexyCooldown). As a discipline priest, I have over 12 cooldowns to that I need to track and many of them are in the short range of a minute or so. The bar would’ve worked if I had fewer cooldowns but with the sheer number of cooldowns I have, it was getting fairly difficult to glance at the bar and know where everything was when all the icons were virtually on top of each other.

Since one of the other things that bothered me was being overwhelmed, I decided to make changes to up the screen space so even in the craziest time, I could still be zen. I took my inspiration from an old reader UI over at WoWInsider. Even though I didn’t necessarily use all the addons they did, I achieved a similar look and feel by tweaking and changing the things I had in place. So, what’s changed?

– No main action bar: Not having to look at so many buttons can make a huge difference in making the screen look clean and uncluttered. I realised that I had a lot of my main abilities bound to either keys or mouseover abilities from Vuhdo – and I had them all memorised. So there was no real need for me to have my entire action bar up there – just the spells I go out of my way to click. I currently have it setup so the bars on the right with mounts, professions and bags disappear when I’m in combat which helps keep the screen clean. For the usual buffs, I used Vuhdo’s convenient ‘buffwatch’ which tracks your two important buffs and doubles as a convenient place to click when you need to buff the raid. (Yes there was one embarassing time when I was battle-rezzed and didn’t pop my Inner Will!)

Addon: Bartender. It’s an addon I’ve used for a while already. I had the option to hit the “Always hide option” which kept the main action bar intact but made it accessible only through keybindings. I used the other visibility options to hide the mounts and profession bars to keep things uncluttered while raiding.

– New Unit Frames: I decided to replace the default unit frames for two main reasons. The first is that I found I wasn’t keeping track of my mana as well as I wanted to when my portrait was all the way up on the top left corner. And when I did bring it down to eye level, I thought it looked fug. So switching it out was in order. The other big reason was that when I targeted a boss, I needed to know their health percentages since so many transitions are tied to that. With customisable unit frames, I can have it show exactly what I want without looking awful.

Addon: PitBull Unit Frames. This one took a little bit of setting up but much of it’s setup was largely intuitive. The good news is that once you have it set up, you don’t have to do it. I really liked the option of having the portrait be a 3D model. 🙂

– Visible Boss Timers: As a discipline priest, our strength is mostly is preventing damage rather than reacting to it. This means that we need to be extra aware of when an ability is going to off in order to successfully time a Spirit Shell. Bringing the boss timers down near where all the action happens was a small change that made life a lot easier for me.

Addon: Deadly Boss Mods. All I did was adjust where the cooldown bars showed up on the screen and have them be closer to my portrait and raid frames. A very simple fix.

– Bar-type Cooldown Tracker: It took me a little bit to find one I liked and did what I needed it to do. I finally found it in Raven. A critical requirement was its ability to also track internal cooldowns such as Rapture. The cool part about the addon is that I had the option of having my cooldowns, buffs and debuffs tracked as either bars or icons. I went with a stacking bar type setup to track my cooldowns and had them stack in order of time left on the cooldown. This solved the problem having icons on top of each other in the same cooldown range and made it much easier to get information at a glance. In addition, I used its buff tracking in the icon form – and I have it only track Evangelism. This makes it so I can easily keep it from falling off at an inopportune time when I need Archangel.

– Clean Combat Text: Seeing what is healing who has always been critical and my current combat text addon makes it so the information doesn’t fill the screen. I have it at a lower opacity unless it’s a critical hit, so it doesn’t take my attention away from cooldowns and such like. In addition, MSBT (Mik Scrolling Battle Text) has extra useful warning for low health and mana, and notifications for when certain spells are off cooldown. 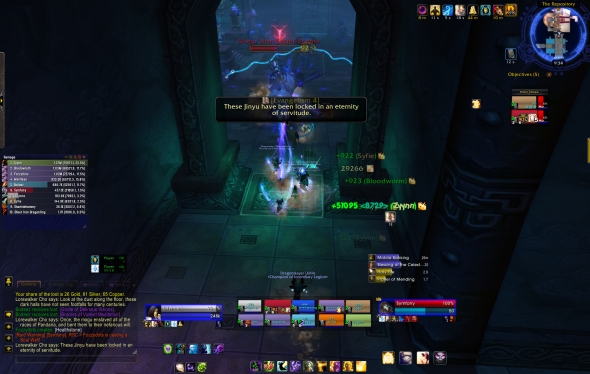 And when the cooldowns get really crazy, it looks something like: 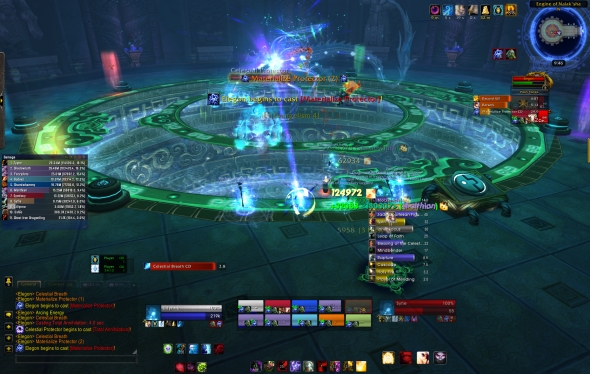 I ran with my new setup on Wednesday and it was fantastic except for the one embarassing moment in Gara’jal where I realised in the Spirit Realm that I’d forgotten to set up my extra action bar. Yep, I wiped my raid that attempt. *Ahem*  So, in the midst of setting up cooldowns and such – remember have a special spot for that extra action button! 🙂

That bring me to the end of my UI revamp. I admit I thoroughly enjoy redoing UIs – it seems like such an art sometimes – but as much as I love it, I’m hoping my new setup is solid enough to last me a good while. Let me know what you think of it. 🙂

2 thoughts on “The Healing UI Revamp”