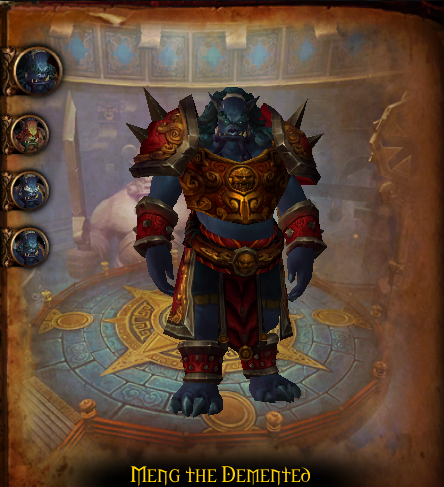 Spirit Kings is an interesting fight which involves dealing with four types of foes – each with their own quirky title. The good news is that we get to deal with one after another. The bad news is that much like ghosts of christmas past, one of their abilities haunts us to the very end of the overall fight, even after they’ve each been defeated. (I’ve made special note next to the abilities that persist through death). This fight is ALL about raid awareness and personal responsibility – its about taking your time, doing the dance and not getting killed.

– Heavy tank heals during Crazed: Get ready for heavy tank heals during this stance since Meng’s physical damage dealt increases by a percentage of twice his insanity. Co-ordinate single target cooldowns with the tanks to see them through the high damage is key – particularly when Meng’s insanity is close to 100.

– Stack and heal during Cowardice: This is a time where a lot of reflective damage is thrown around and the DPS have to limit their damage to make sure it doesn’t end up being suicidal. Group up to heal through the reflective damage. This is a great spot for shorter healing cooldowns to give a bit of a boost.

– Stack and use cooldowns for Maddening Shout: This is a time of heavy raid damage so stacking up for area heals is key. There will be a lot of raid wide damage here since raid members need to damage each other to get out of the effect. Keeping the raid topped off to survive AoE from the dps is essential to this phase. Planning out raid cooldowns like Barrier or Tranquility is very helpful to bring the raid back up. (Persists through death)

– Stack and AoE heal for Massive Attacks: On normal Massive Attacks hits for 800k to be shared by raid members. It will still hit fairly hard even while being shared so queue up shorter healing cooldowns like Spirit Shell to deal with it.

– Move out of Annihilation: The damage from Annihilation hits for 1.5 mil in normal and cannot be survived. Be sure to avoid at all costs.

– Avoid the Wall of Death: Also known as Flanking Orders, the walking wall of death pandas hit for quite a bit and must be avoided. (Persists through death)

– Avoid Volley: The first one is fairly wide and requires a bit of AoE healing to deal with. The other two volleys that follow do increasing damage and should be avoided as much as possible. Keeping people topped off is key.

– Heal members from Rain of Arrows: When players are trapped by an arrow, they continue to take 30k damage per second until free. Heal them up to make sure they survive while they’re being freed.

Zian of the Endless Shadow

– Heal through Shadow Blast: Ideally this will be interruptable and won’t hit anyone but it’s very likely that one or two ticks of this will go off. It hits fairly hard so keep an eye out for when members get hit.

– Heal though Charged Shadows: This is a shadow version of chain lightning where a random gets hit for 100k with this ability before it jumps onto other players. It’s a sizeable amount to be hit for so make sure people are topped off to survive this one.

– Kite Undying Shadows: This is when a nasty skull fixates on you, does AoE damage to everyone in 10 yards and finally, drops a void pool when it is killed. If Undying Shadows fixates on you, kite it away from the raid until it is killed. I usually throw a bubble on the person with the skull stalker for the Body and Soul speed burst. The sooner they get away from the raid, the less damage the raid takes.(Persists through death)

I went into this fight with my standard glyph set of Holy Fire, Prayer of Mending and Penance. The penance glyph came in useful during the movement heavy phases. The key to mitigating the damage well in this fight is knowing how the raid will position when each of these bosses are active. Barrier, being an area specific cooldown is best used when Qiang and Meng are active. The raid tends to be spread out during Zian and Subetai so I ended up favouring Spirit Shell and Cascade to reach far off players.

Spirit Kings is a very fun fight – it’s fast paced, keeps you on your toes and is a fantastic test of the group’s raid awareness and communication. Happy healing! 🙂