So transmogrification is on the horizon and there are quite a few reasons I’m excited for it. When I collected and saved Dungeon Set 2 and Tier 1, it was purely for RP reasons and I hadn’t even dreamed of being able to use them outside that context. The meeting of RP and raiding is fantastic for me – I mean, what could be cooler than killing baddies in metaphorical high heels as it were! The other part of transmogrification is ofcourse the ability to hide particularly unflattering sets. Many of the tier sets look fantastic but we always have the odd one that just looks….awful. While I hardly look at my character while raiding, I still like to avoid cringing while logging in! And now, instead of “Follow the tree!” its turned into “Follow the Cactus-head!” or something like that. Unacceptable. There is a reason I am Noggenfogger’s best customer this tier.

My choices for transmogrification have a mix of fashion as well as the stories that make them special to me. Without further ado, here is the list!

This is a set that will always have so many fond memories for me. My story of Loremaster is always tied to this set. The quest chain was one of the longest, most tedious and frustrating – all the endless UBRS runs, creating the darned Scepter of Beckoning, watching the Baron never drop the Wildheart Kilt…..good times. It was tough but it was worth it with all the blood, sweat and tears and it felt like a druid rite of passage. My final walk through Ashenvale before I saw it burn at the Shattering also happened wearing this outfit. All these memories just put it at the top of the list for me.
I like this set as a night elf particularly with all the nocturnal colours combined with the celestial theme. So, I owe you some bad news and some good news. The bad news is that this is no longer obtainable in game (although that might be changed in the future). The good news is that there is a perfect recolour of this set available in the Outlands. It’s very pretty with its subdued colours and I highly recommend farming it out if you don’t have the original.
Phaelia’s Set (Non- tier version of Conqueror’s Nightsong Raiment, Tier 8)

This one just blows me away every single time. There are two reasons why I chose to go with the non-tier version than the tier. The first is that I really do prefer the green colour on this one over the yellow-ochre of the 10-man version. I thought it made the shoulders especially seem more woody and natural. The other has to do with the story behind this one.

Way back when Ulduar was out, I coughed up the money to buy Phaelia’s Vestments of the Sprouting Seed, a then awesome chestpiece that was named after Phaelia from Resto4life. I never had a chance to finish up the set and I saved it in my bank ever since, never being able to vendor it because it just looks so awesome. (And I hadn’t even begun to collect RP sets at that time….I doubt I knew what was RP was frankly). 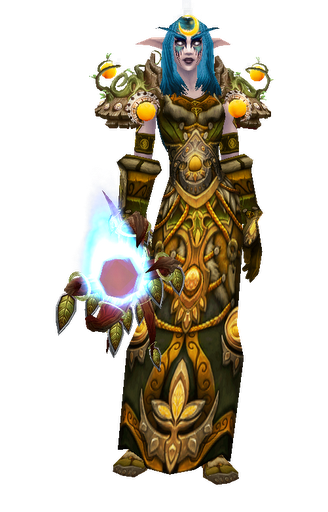 The Thunderheart Raiment is a breath of fresh air. It moves away from the tried and true leafy green outfits and explores the other side of druidism, the Tauren.
The set is so well designed incorporating the rugged leather look with beads and feathers everywhere, its only a matter of time before the rolling plains of Mulgore are before us.
Thunderheart pieces can be obtained by turning in Tokens to the gear vendor in Caverns of Time (near the entrance to Hyjal Summit raid). The pieces drop in Black Temple, Hyjal Summit and Sunwell Plateau. 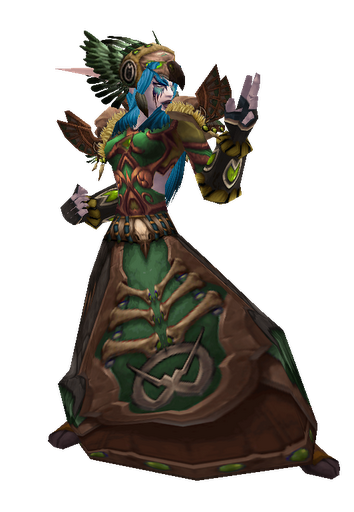 Here is a recoloured version of the Thunderheart Set which I find just as pretty. I’m tempted to stash both of these away in the bank hehe.
All pieces, apart from the chestpiece, drop in Black Temple. 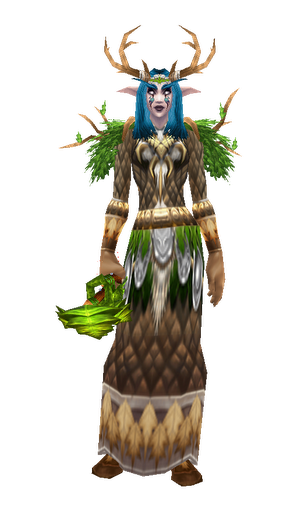 Another set that really screams druid, and not just with its name. I really love the down-to-earth, leafy look this has going. No fancy textures, no animations, no smoke rising up from gear – just simple druid awesomeness.

I originally farmed this out before the Shattering for RP reasons but I’m happy I’ll be able to get it out of the bank and use it more often! All of the items can be found in Molten Core:

What I find really inspiring about the Nordrassil Raiment is its association with the current battle to save Hyjal. Despite being an old and obsolete tier, it has a strong presence with all the druids battling Hyjal decked out in this gear. I’d find it quite fitting if I were fighting the foes of Firelands in this gear. And it fits perfectly because really, we’re trying to save Nordrassil. Tokens for this set drop in Serpenshrine Cavern and Tempest Keep.

While set doesn’t technically have “Nordrassil” named items for belt, bracers and boots, the following items complement the set rather well:

Wrists: Grove Bands of Remulos (The Lurker Below – Serpentshrine Cavern)

Thats it for now as far as my choices go for Tier. I’d have loved to include the other non-tier outfits I’ve been working on  —   but those will just have to wait to have a post of their own. Which Tier would be your favourite, and how does your list look for transmogrification? =)

6 thoughts on “Druid Outfits: My Tier Picks for Transmogrification”